I thoroughly enjoyed this race when I did it for the first time last year, so there was no hesitation about signing up again this year.  Kari joined me for the race this year again too, doing the duathlon.  We got up around 5am and headed to the race.

As soon as we walked our bikes into transition I was met by a lady who recognized me and said she had read my blog from a previous race. She follows the same local running group that I do, but I was surprised that she had read it.  I only share it on my page, so I’m guessing someone else must have shared it.  Anyway, I kind of felt like a celebrity after that!

We ran into many familiar faces and we shared race day strategies and advised each other on who to look out for!  Seems like a very close knit group.  Even my wife remembered some of the duathlon competitors.

The swim temp was 77 degrees, barely wetsuit legal, but I only saw one guy wearing one.  I opted to not even bring it from the car.  I had a really good swim.  Last year I was a touch faster, but I remember laboring more too.  This swim had zero contact and was issue free.  Some commented post-race that they thought the course was longer than 400 yards.  My watch showed 511 yards, but I forgot to hit my lap button as I exited the water and headed into transition.  Official T1 time was 1:14, which isn’t too bad.

Like last year, I opted for the full aero disc on my bike and went all out from the start.  I was pushing hard through the whole 11 mile ride.  I didn’t get passed by anyone this year, and I was blowing by lots of other riders.  The wind was much lighter this year and it was also from the west, so it only affected a mile or two of the ride.  Moved up several spots after the bike.  Official T2 time was 1:27, slower than T1 because I sat down to put on socks.

I had not trained for triathlon much this spring in summer.  This time last year I was already 10 or 11 weeks into Ironman Louisville training.  When I got off the bike and started the run, my legs were rubber.  Very apparent to me that brick workouts make a world of difference, and I hadn’t done hardly any this year.  But all things considered, I settled into a comfortable pace and just started catching the next runner ahead of me.  I must have passed a lot of duathletes, because I only moved up 5 spots from the bike.  I started pushing a little harder at the 2 mile mark and just kept up the effort until I finished.  I was greeted by a guy named Mike, who I beat last year and he asked what had taken me so long.  Oh well, try to get him next year. 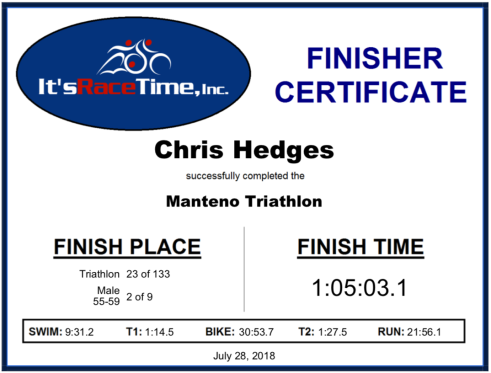 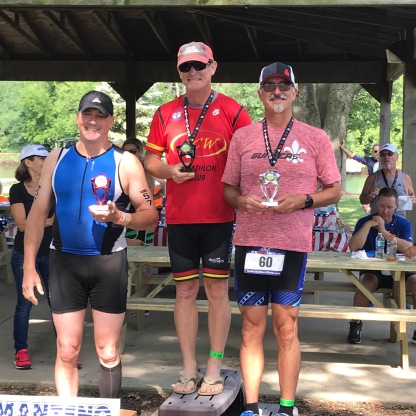 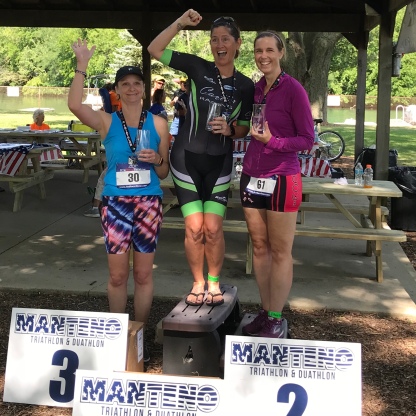 Kari and I both got 2nd in our age groups.  Kari’s group seemed to be having more fun.

Overall, a little slower than last year, but I was not as prepared this year as last.  Very fun day.