I usually refer to Week 27 of the Be Iron Fit Ironman training plan as the “Dreaded Week 27.”  It’s the toughest week in the 30-weeks of training, ending in a 6-hour bike ride with a one hour run right after it on Saturday, and a 3-hour long run on Sunday.  But I took a little sting out of it by basically doing that workout at the end of Week 26.  I did that for a couple of reasons.  First, the opportunity presented itself last Saturday to ride an extra half-hour when I rode with Susan and we were managing our effort very well, staying hydrated and fueled on a very hot day.  So as we got closer to getting back I just committed to it and it worked out fine.  Same with Sunday, I was feeling good and figured I would just go an extra 15-minutes and make it a full 3-hour run.  On the Friday before those two days I was somewhat dreading the weekend, but after getting out there and doing the extended portions and feeling good afterwards, it was a huge confidence builder for me.

Secondly, my wife Kari and I planned to head north to our lake home to enjoy some lake life and take care of some fall house and yard needs, and I thought that if I did the workouts a week ahead of time, I might not be so pressed for time or be so wornout if I swapped the planned workouts.  I may even cut the long Saturday ride and long Sunday run down and start my tapering a little earlier this time around.

Here’s how the Dreaded Week 27 went for me.

Monday is usually a rest day, and I usually putter around the house and do the things that get neglected during the week; catch up on laundry, mow the grass, get groceries, etc.  But after a couple of walks I was bored and thought why not do a swim.  So I put on some tri shorts and jumped in.  30-minutes is my typical swim workout, but I was feeling good so I pushed it to 60-minutes.  When I got to sixty I was still feeling pretty good, so I pushed it another half-hour, and before I knew it I had swum 4300 yards – covering the distance of an Ironman swim.  There was no tiredness, no calf or foot cramps, and really no boredom, which surprised the heck out of me.  Knowing that I can easily swim the 2.4 miles in my own backyard pool in 1.5 hours was a good feeling.  Oh sure, I have done the Ironman swim four previous times, so I know that I can do it.  But I still needed to train for each one of those previous attempts, and prove that it can be accomplished with smart training.  Could I actually be enjoying swimming?  Let’s not get carried away.

Tuesday ushered in a little bit less heat for the day and I ran at a time when there was a coolish breeze and it was overcast.  I did the 10-minute warm-up and then started in on the five 6-minute repeats.  I was pacing them pretty well.  My legs were a little sore at the start, but when I picked up pace I did so easily.  My turnover felt smooth and comfortable.  I felt like I was rocking it!  I skipped the swim due to the previous day’s effort, and opted to vacuum the pool instead.

Wednesday was quite a different day weather-wise than what I had last weekend.  Much cooler, with a strong northeast wind.  I hopped on the bike and was flying along heading south on my usual route.  I saw my buddy Charlie attempting to run on his two injured toes and wished him a good run.  I must have been averaging over 20 mph heading south, but turning around and coming back north was not fun.  The ride ended with a 18 mph average, so I guess I was doing okay.  A quick change to running shoes and it was off on a 30-minute run.  I didn’t feel the wind as much, but the cooler temperature had me running with a good tempo.  I like to use the Wednesday bike/run brick as a hard effort instead of staying in a Zone 2 heart rate zone.  It’s the one day I like to hit the gas.

Thursday ushered in another cooler day and the winds were better for me as well, which caused me to push myself a little more than I should of.  I could feel my calves tightening, but the 1.5-hour ride went well.  I jumped in the pool afterwards and tried to swim, but I was getting some calf cramps and called it a day after 21 minutes.

Friday I got in my 1.5-hour run and then jumped into the car with Kari to head to Wisconsin.

Saturday was rainy of course, but it wasn’t too bad, and after a hearty breakfast with Kari at Tula’s in Minocqua the rain was turning to a misty drizzle on its way to ending. I planned to do a 5-hour ride and I stuck to it. I headed down Hwy J towards St. Germain to pick up the trails and head into the beautiful Northwoods. I hadn’t even gotten a few miles into it and the wet road and what little leftover sprinkles had me pretty wet. But it was bearable and I kept pushing on. I had never went further than Boulder Junction before so I continued onward and found the trail toward Manitowish Waters to be beautiful.

I took a couple of minutes on the way back to stop and enjoy some scenery just west of Boulder Junction. The trail here was beautiful.

I was thinking of how much fun I was having and four hours of the ride was just perfect. The last hour, not so much. Back onto Hwy J I was greeted with hills and headwind and an overall lack of energy. At one point my thigh muscles started to cramp, which had never happened to me before. I decided to slow down and fuel and hydrate more and limp it home. I got off my bike and sat down and took a minute to watch my calf muscles twitch uncontrollably. Good times.

I decided to not do the 60-minute run after the bike after watching the twitching going on.

Sunday was beautiful. I had recovered enough from yesterday’s bike ride that I talked myself back into doing a long run after talking myself out of it during the latter portion of yesterday’s bike.

I headed to the Bearskin Trail in downtown Minocqua and before I realized it, I was was crashing a marathon and half-marathon in progress. It was fun to see the runners coming back in with determination on their faces. I ran out seven miles and turned around and headed back. There were spectators cheering me on, as they didn’t realize that I wasn’t in the race. I said, “I’m not in the race, but I love your enthusiasm!”

It wasn’t long and the 3:45 marathon pacer caught up to me as I was walking and taking a gel. He was encouraging everyone to join in, and after telling him that I was on a training run he still wanted me to pace with him. I ran with him chatting about my Ironman and ultra coming up and I then took a detour to avoid the finish line, as I already felt awkward being on the trail with the others. I made it home with an extra mile added due to the detour, making it 15 total miles and some fun memories of running with those runners. Maybe I will join them for real next year. 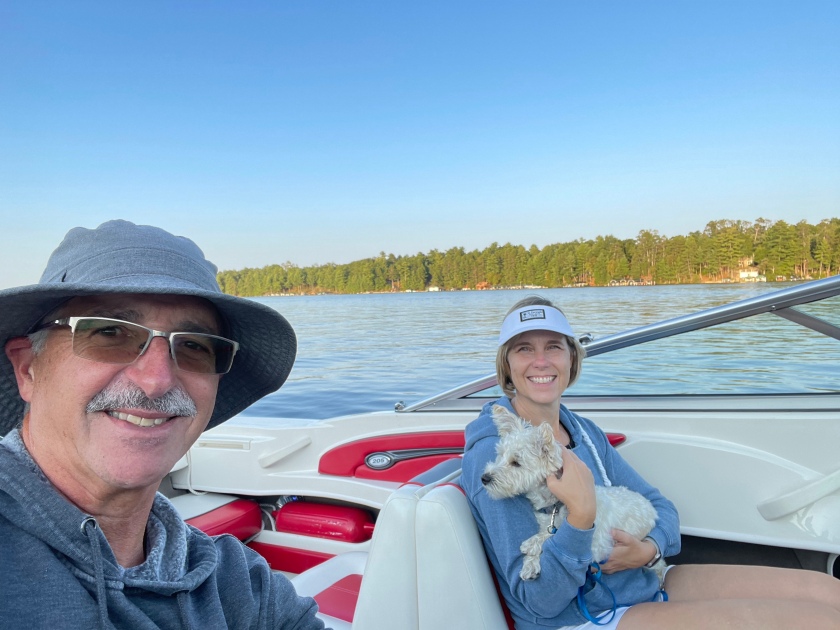 Time to enjoy some lake life one last time before pulling the boat out of the water for the season.