My coworkers had been talking about this show called “The Worlds Toughest Race” on Amazon Prime Video and asked if I had watched it.  I hadn’t, but I asked if they were talking about the Eco Challenge, and sure enough that was it!

I was familiar with the Eco Challenge having watched a series or documentary on it probably ten years ago.  Apparently it lives on and somehow escaped my attention.  That’s probably because I watch two cable channels and nothing else.  But they were adamant that I should watch it and so I checked it out.  I probably shouldn’t have because now I have a new hobby.

The Eco Challenge requires a lot of skills to get through it, but as I watched and studied it I realized that orienteering is most likely the greatest of the skills to have.  So I looked into orienteering and found that a local forest preserve district had some dedicated orienteering courses to try.  All I needed to do was to recruit the wife to join me and try it out.

The course we checked out is in a forest preserve called Waterfall Glen.  The f.p. website had a lot of great information on orienteering and maps to their four dedicated courses.  If you are local to the Chicago suburbs, you can check out their website and course maps here:  Click here and scroll down to Orienteering Course

I did convice Kari to join me without much arm twisting or begging and we talked about preparing ourselves for this mini adventure.

Well, we probably should have worn pants and water would have been a really, really good idea.  We did end up bringing the sunscreen and bug spray and did apply it, but it probably wasn’t really necessary.  It was a really nice day so we got by okay.

I have never been to Waterfall Glen Forest Preserve but as soon as we neared the entrance I realized that it might be the most popular forest preserve in the southwestern suburbs of Chicago.  It was packed.  People were walking, running, biking, hiking and just generally hanging around on the trails.  Fortunately for us we weren’t on the main trail for long as our orienteering took us onto much less traveled paths.

We easily found the first “control” marker and I patted myself on my back for not getting us lost.  The second control marker was located down the path a little bit, but I looked at the map and tried to convice Kari that it would be quicker if we took this side dirt path through the woods.  Fortunately she was game and off we went.

We made it through alive!  And the rest of the control markers were fairly easy to find, with the exception of two of them that had fallen down and were laying on the ground.  One of the markers was hidden in the trees somewhat and we had to double back a little bit when we realized we had missed it.  But we found them all and it really wasn’t too challenging.  It took us about an hour to navigate our way through the map and upon finishing we decided to take a crack at the other beginner course, mainly because we had time and also to the fact that our map reading skills had improved dramatically, thanks to Sacagawea – I mean, Kari.

I foolishly thought the beginner course (Beginner Course Map) would be easier since it wasn’t as long as the other one.  Wrong.  For a beginner course, this one was much tougher, mainly due to the terrain – lots of indistinct trail with fallen trees and other stuff to confuse the heck out of us, and some open grassy areas which really tore up our bare legs.  Should have worn pants.

The first four markers weren’t tough to locate, but the fifth one had us a little worried.  The trail wasn’t very clear and we had to double back and take different routes until we were finally able to locate it.  For minute there I thought I might have to resort to cannabilism, but fortunately for Kari we found it and continued on.

As we continued on the trail to the next control marker we would occasionally pass some people heading the other way, usually asking if we had found the waterfall.  We didn’t find a waterfall, but we did find this hill that would have been a nice waterfall if the area wasn’t experiencing drought conditions.

We made it back to the parking lot with our legs a little scratched up from the brush, our lower legs covered in trail dust, and kind of thirsty.  But our first shot at orienteering was a success and lots of fun!  I can’t wait to go back and try the intermediate and advanced courses.  I’m just going to make sure that I wear pants, bring water and maybe add some trail shoes to make it a little more easy to navigate. 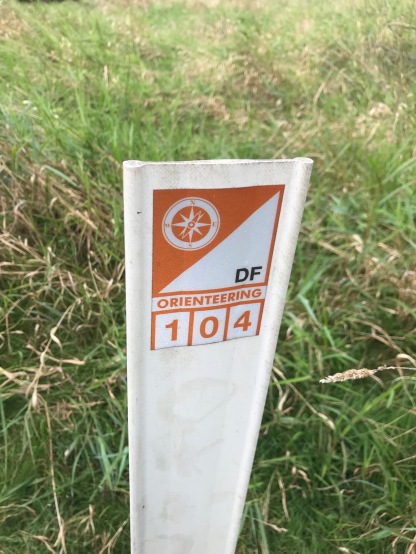