Time for another update in my search to add a classic car to my garage that I will probably only drive twice a week!  It’s been almost two months since my last update, but it isn’t because I have slowed or stopped my search, it is just taking much longer than I thought it would.  First off, winter is a tough time to buy a collector car.  You don’t want it outside in the snow, and definitely shouldn’t be driven on salty roads.  Buying a car in winter would mean I would have to store it inside, which means that I would have to park my regular driver outside.  I don’t want to do that either.  Also, it’s easy to get excited about a car you find for sale, but after the experience of looking at that Oldsmobile back in November and almost rushing into a purchase that I might have regretted, I learned to slow my roll, so to speak.  Lastly, it seems like the “pickin’s” are kind of slim, especially since I have limited myself to just a few makes and models.

Speaking of that 1967 Olds 442 convertible that I passed on, I found it for sale at a classic car dealership in Ohio, with a new sticker price of about $8000 more than when I almost wrote a check for it.

THE DANGERS OF EBAY AND AUTO AUCTIONS

I should just rename this quest as “My Search For a 1967 Plymouth/Dodge B-body Convertible” because that is kind of what it has become.  When the search began I was mostly looking for a 1970 Chevelle SS or an Olds 442 from 1967-68.  I found that I really like the 1967 cars in general, they are probably my favorite muscle car year.  But after looking at the cars from that era, the Plymouth GTX and the Dodge Coronet R/T just get my motor running (pun intended) for some reason.  A couple of cars that I mentioned last time are still out there and I like them, but I’m still looking for one that isn’t that far away and would allow me to take a quick drive to go look at it.  I have recently found a couple GTX’s that fit that need.

First up is this 1967 GTX convertible located about 25 miles from me: 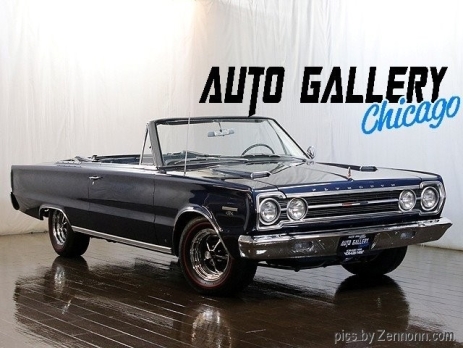 I first found this car by searching on eBay, where the starting bid was around $35,000.  Now I like it a lot!  So I bid on it, with my max bid at $44,000.  I think it is worth more than that, I was just being conservative with my bid.  I was the only bidder and I didn’t hit the reserve auction price when it ended.  The dealer rep sent me a message through eBay informing me that the car had its original window sticker and build sheet.  That’s great and pretty rare to have the window sticker, but I’m not buying it for the window sticker.   So I went to their website and looked for more info.  There they had the car listed at $59,990.  Now I had sticker shock.  No wonder I didn’t hit his auction reserve price.  Most of the non-Hemi 1967 B-body cars I have looked into have sold for around $50,000 or under on average.  He was asking way too much.

It hits all my wants:  GTX with a 440, a convertible, and it is local.  I should buy it.  But it has some cons too, mainly that it is all blue, which is a lot of blue.  I bet that dark-colored interior heats up pretty hot in the sun with the top down.  The driver side armrest on the door has a crack in it.  You would think that a car that is sporting a decent restoration would have had that issue addressed.   I also noticed that the tail lights were mismatched.  The 1967 Belvedere had two styles of tail lights, one with a chrome strip and one without.  This car had one of each version.  The dealer also adds that it has “Protect-o-Plate” which is wrong.  Protect-o-Plate was GM’s warranty plan, Plymouth had a similar version called “Certicard.”  All of this makes me think he hasn’t done his research on this car.

I decided to keep an eye on this car and saw that he listed it again on eBay.  I found myself bidding on it again, this time with a max bid of $46,500.  I was bidding on it against another bidder, but he was a bigger cheapskate than I was and the auction ended somewhere in the upper $30,000’s with me being the max bidder.  Then I noticed that on the dealer website they had dropped the for sale price from $59,990 to $54,990!  They came down $5000!  I was starting to believe my patience was paying off.

It was listed again on eBay again this past week with the usual $36,000 opening bid.  I bid again but pushed my max bid to $48,000 just to see if I was getting close to the reserve price.  This time I had some serious competition in the bidding wars.  I quickly got outbid until the auction ended with me losing to a max bid of $48,300, which didn’t meet the reserve, and the car didn’t sell.  It’s now listed again on eBay with a “Buy It Now” price of $59,990!  Did we piss this guy off with our low bidding?  Their website still lists it at $54,990.  I guess I might have to find some time to actually go up there and talk with them about the car and actually see it and maybe even drive it.  Heck, I may find out that I’m not in love with it, just like I did with the 442.

One thing I need to be cognizant of is that whether buying a car through eBay or at an auction like Mecum or Barrett-Jackson is that without seeing it, I’m not sure what I am really getting.  That is what is making this quest so difficult.  Some of these cars are too far away for me to go see easily, even though I’m drooling at the photos on the auction and dealership sites.

I went back to the old Google machine and found a newly listed GTX for sale online located coincidently enough about 10 miles from the one above, so again it’s really close to me and might warrant a trip to go see it.  The downside is that it is a hardtop, not a convertible.  The positive – 4 SPEED BABY!

I like it, but again my eye is catching things to be leary of.  There’s a photo of the engine bay that shows that the radiator at some point in its life had a leak and has a bluish copper oxidation type material on it.  Not sure if it is still leaking or not, but that could be a red flag.  My coworker and fellow car nut Carl thinks that may be a sign of the engine running hot, and might have a good point.  I think it may just be an old car showing its age.  The thing is though, my brother was the mechanic in the family, I am “handy enough to be dangerous” with tools.  I wish my brother was still alive, this search would be much easier and probably would have been over with by now.

The website does not list a price for this car.  Even though it’s not a convertible, I may have to inquire about the price and go take a look see.

The surfing the interwebs for cars is something I spend my evenings doing, and I still look at the offering from all of the big three.  Although I am not much of a Ford guy, the most recent issue of Hemmings Muscle Machines magazine featured a 1967 Ford Fairlane GTA, which looks pretty cool.  I may have to look at those a little closer too.

But this 1968 Buick GS convertible definitely caught my eye.  The first impression is that the photos jump off the page.  The sky blue color really pops.  I must have a thing for blue.  Another thing that caught my eye was the price – $34,900!  Now we are talking!  But the car is in Florida.  And closer inspection of the photos show some little things here and there that give me pause, mainly the door and trunk gaps, but cars built in the 1960s weren’t really that high on that type of quality.  My inlaws live in Florida, maybe I could get my father-in-law to go take a look at it.  I can hear him now:  “It’s very nice.  It’s blue.  It has four wheels.”  That would be the assessment I would probably get out of him.

So that wraps it up for this edition.  What it is coming down to I guess is that I am going to have to get off my butt and actually interact with these sellers to make a decision one way or another.  I need to get on it – summer is coming quick!