I spent this Father’s Day in my typical fashion, goofing around doing my typical stuff. I enjoyed a nice bike ride with Kari and spent some time swimming on a very hot day. The extended family appeared and more swimming and good food and talk was enjoyed.

At one point in the conversation we talked about the need to purge some of the junk in our house, and I admitted that I was the hoarder in the family. “But I’m a neat hoarder!” I exclaimed, and the wife agreed.

After dinner everyone was getting ready to leave for home. I noticed that Ben’s car had a brake light out. I thought I had a spare, so I attempted to fix it. It turned out I had a different bulb than what he needed, but I remembered that my mom had this old cabinet thing with a bunch little odds and ends in it. Sure enough, the bulb we needed was in there. My mom had saved the bulb, and I had saved the cabinet full of junk. We swapped out the bulb and off Ben drove.

I had barely got my tools put away when Ben pulled back into the driveway. I could see that his front tire was flat.

We pulled the tire and I couldn’t see any nails or punctures anywhere. I filled it with air and pushed it around the back to the pool to check for leaks. The problem became apparent immediately, the vavle stem was leaking.

That could have been a problem, but thankfully I had a tool – a tool that was my Dad’s that I had kept. It’s probably been in my possession at least 40 years or so. A simple little device to remove and install a valve stem core. Hoarder? – pffft. Please. 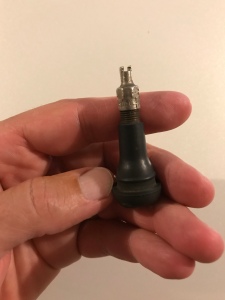 I tightened the valve stem and tested it again and it was still leaking. The valve stem core must be bad, no longer holding air. That’s a problem, because I knew that I didn’t have any extra valve stem cores laying around. I may be a hoarder, but I’m not crazy.

But wait! The tool itself was just a cap on an old valve stem, and the valve stem itself probably had a core in it. Sure enough, I pulled it out and was kind of shocked to see that valve stem cores had not been reengineered in 40 years. I put the old one in and surprisingly it no longer leaked. Fixed!

So on Father’s Day, I was able to save my son’s day, thanks to my dad leaving behind a simple tool for us to use nearly four decades later. Dad to the rescue for sure.