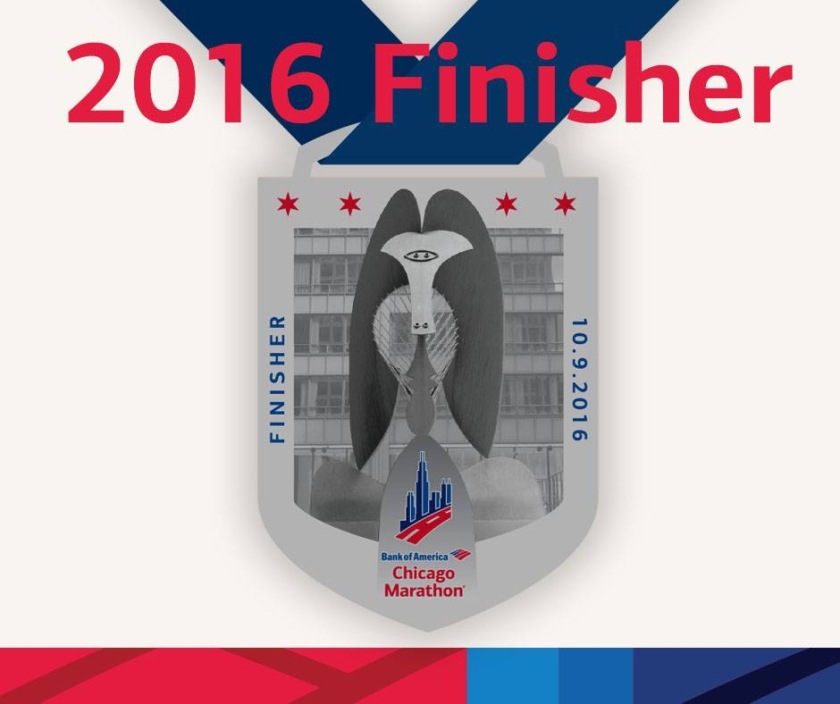 After getting a personal best and a Boston Marathon qualifying time at the 2015 Chicago Marathon, and then missing the cutoff by a half minute, I felt like I had a score to settle after that disappointment.  I knew however, that trying to improve on a marathon best that was ten minutes faster than my previous personal best was not going to be easy.  But this year was shaping up to make me well prepared.

Leading up to the marathon I had already had a pretty good training season, thanks to training for and completing Ironman Lake Placid.  The training for IMLP started in late 2015 and 30 weeks later got me to the finish line in the third weekend of July.  (You can read my IMLP report here:  https://anamazingrun.wordpress.com/2016/07/29/2016-ironman-lake-placid-race-report/ )

I usually follow a sixteen week plan for the marathon.  The plan I follow was created by Nike and was promoted by the Chicago Marathon.  I was already into Week 2 of the training when I finished up the Ironman.  So I wasn’t really starting at the beginning, seeing that I just finished a marathon as the plan had just began.  But I needed to dial it back a little for a post-IMLP recovery and it was easy to slide in to the plan where I needed to be.  (Here is the plan I followed:  https://assets-chicagomarathon-com.s3.amazonaws.com/wp-content/uploads/2014/06/2014_Advanced_Final.pdf )

So I eased into the plan, adding a few bikes into the mix, and kept checking off the weeks until race day.  My longest run was a 22 mile run that I didn’t really want to do, but I got it done.  Most of the training was pretty warm, and I struggled to train at a tempo that was near my goal of being under 8 min/miles.  But I knew that training and racing were two different things for me, and the summer heat would hopefully be gone by race day.

I went to the expo on Friday midday and found it to be very crowded.  I usually buy some race day clothing at the Nike store, but after seeing how long the line was to check out (it actually went outside of their exhibit and wrapped around it!) and being disappointed at the junk they were selling, I almost passed on it.  But I ended up buying a white event t-shirt and a new set of red shorts, along with a new visor.

Saturday was busy as usual for my family.  I was glad that everyone was around for the weekend though.  My son Ben didn’t have a XC meet and ended up coming home from college to watch the race.  My daughter Ashley was excited to come home and watch the marching band home show that my youngest daughter Rebecca was involved with.  I ate a pasta meal with the family at Gatto’s, and then made the trek into Chicago to the hotel.

My usual plan is to walk to the gate where I enter for the corrals just to make sure nothing has changed.  Then I walked around a little, grabbed a muffin for breakfast, and a sub sandwich for dinner and headed to my room.

I walked through the lobby and got a glimpse of Joan Benoit Samuelson, which was pretty cool.  I made it to my room and tried to find the Cubs playoff game on TV.  Very disappointed to find the channel it was on wasn’t carried by the hotel.  I tried to find it online, only to find that I could only get simple live updates on some dumb MLB website.  So I monitored that while I pulled up the Ironman Championship live stream from Kona.

My alarm went off at 4:30 am and I got up and got ready.  I made a cup of coffee, ate my muffin and started getting myself race ready.

I took my own advice and headed to the corrals at 6 am.  In the past I have waited too long and had to stand in line waiting to get in.  The wait was minimal this time.  I walked to the corral area got in line for the toilets.  Took care of that and then found a place to sit on the sidewalk outside of Corral B and just relax.  People watching was interesting as usual.  I saw actor/comedian Rob Riggle getting escorted to the front of the race even though he was wearing an E Corral bib.  Must be nice being a celebrity.  At about 7:10 am I ate a gel and drank the last of my Gatorade and then used it to inconspicuously pee into before entering the corral.  Once in the corral we listened to the National Anthem, watched a group of geese fly over almost on cue, and started moving forward.

My plan had been formed by virtue of not making it into Boston.  I would shoot for a sub 3:25 marathon, which meant holding about 7:50 min/mile pace.  My strategy was to run even splits until either 5 miles, 5K, or less to go seeing how I felt at those times and then push as hard as I could to the end.  Race day was perfect – temperature in the 50’s at the start and rising slowly into the low 60’s.  There was a moderate breeze that concerned me a little, but I knew we were going to have a great day to run.

Mile 1:  7:36 split – I was running comfortably and wasn’t surprised at this split.

Mile 2:  7:41 split – Another good split, nothing out of the ordinary at this point except I felt like I had to pee again.

Mile 4:  7:43 split – Locked into that tempo.  I was starting to sweat somewhat, which surprised me.

Mile 5:  7:39 split – Into Lincoln Park and moving along well.  Could really feel the wind here and it definitely cooled me down with my sweaty shirt.

Mile 6:  7:46 split – Soon after leaving the aid station where volunteers were yelling “Gatorade” and “water,” we were met with a guy yelling “cigars, cigarettes.”  Funny.

Mile 7:  7:40 split – Getting as far north as we would be, I was glad to be turning around.  But as soon as you do, you get hit with the smell of breakfast.  Gets me every year.  Smells so good.

Mile 8:  8:20 split – Just before the Mile 8 marker I saw the toilets and saw my chance.  I had the need to go since the start and I knew I would have to make one pit stop.  As far as pee breaks go, this one was typical, but I think that it cost me the sub-3:25.  I didn’t try to make up the time here, I just got back on the pace I had been running.  I also took my first salt capsule at the aid station.  I wasn’t thinking that I would need them today, but the amount of sweating I was doing made me commit to taking one.

Mile 9:  7:42 split – Somewhere in here I tossed the homemade tube sock arm warmers I had.  I had rolled them down, but kept them in case it got cold.  I kept my gloves, but just held on to them, mainly for personal memento reasons.

Mile 10:  7:49 split – Okay, for some reason the race would be a let down for me if I didn’t see Elvis in this mile.  Upon turning onto North Avenue, I could hear the music.  Normally he is right next to the roadway, but this time he was up a little higher and I wasn’t sure I would be able to get my fist bump.  But I saw an opening and went over and yelled “Hey Elvis!” and he met my fist with his.  Made my day.

Mile 12:  7:45 split – Somewhere in here I found myself running with a guy carrying an American flag.  He was a very popular guy.  The crowd was making noise for him and I got energy from that as well.  But after the flag hit me in the face a few times, I knew that Flag Man and me would have to part ways.

Mile 13:  7:44 split – Another very close split time and I got through the 13.1 mile marker in 1:41.49.  A quick calculation in my head told me I was doing just fine and looking at possibly being closer to 3:20 than 3:25.  I saw Kari, Ben and Ashley for the first time through this mile and it gave me a boost.  I could tell Ben was following my splits closely and was cheering me on like I usually do for his races.  Made me proud.

Mile 14:  7:42 split – A little faster, probably due to seeing the family and starting to head through the Cheer Zone of the route.

Mile 16:  7:58 split – Not sure why there is a 20 second difference.  Maybe I hit the split/lap button too early in the previous mile.

Mile 21:  8:05 split – Okay, lots of distractions in Chinatown – the music, crowds and of course the photographers distracted me enough that may have made this a slower mile split.

Mile 23:  8:07 split – (See note below)  Just a 5K to go, and I got my last gel in me.  Here’s where in your mind you are ready to turn to the finish line, but the course takes you south and then east for a block until you hit Michigan Avenue for the final stretch.  I tried picking off runners that were ahead of me, one at a time.

Mile 24:  8:07 split – (Miles 23 and 24 were averaged as I missed the marker for Mile 23 and hit the lap button around 9:20 or so.  I added them together and averaged them for the splits.)  I felt like I was really pushing, but the effort was all in my head as it was taking that effort physically to maintain what I perceived as a fast pace.  With two miles to go, I put my head down and started running.

Mile 26:  7:41 split – The fastest mile I had run since about Mile 14.  I turned and climbed “Mount Roosevelt” and it seemed like an eternity.  A quick left and I was checking my watch to see how close I was to 3:25.  I sprinted with all I had left.

The finishing chute was a blur.  I was really having a hard time moving forward, almost staggering and felt really drained.  It wasn’t long and they handed us a bottle of water.  I started sipping on it and then grabbed another salt capsule out of my fuel belt and downed it.  I made my way to some misting fans and just kind of hung out there a little bit until moving on.

I chose an older lady out of all the volunteers to put the medal around my neck and wrestled with my emotions a little bit.  Seems strange that after 16 marathon finishes, I still get a little choked up at finishing a race, especially when I set a personal best or have a great race.

I shuffled along picking up a banana, an apple and a bag of goodies and then saw the group of guys handing out the mylar blankets.  They were pushing them like they were car salesmen or something.  They were trying to get people to laugh and it worked.  I got my blanket and headed for the gate.  One last picture as I walked out and then I made my way back to the Hilton to meet my family.

After a quick shower it was a two block walk to Devil Dawg’s on State Street for the usual post event lunch.  Another successful Chicago Marathon in the books!

Here’s some of the details of my race that helped me get another personal best and Boston Qualifier.