28 years of running are in the book!  I say “book” in the literal sense, seeing that I have been logging my runs since 1989 and keeping them in a notebook.  It’s becoming a behemoth!  28 total years and a crazy 21,867 total miles is what I currently stand at.  I’m very proud of that.  I’m glad I started logging them down back in 1989.

As it is the usual custom for me, I like to sum up the year and take stock of my accomplishments and create goals for the following year.  I started doing triathlons in 2012, so I now include notes about my triathlon season as well.  So here’s my 2016 Running & Triathlon Year in Review! 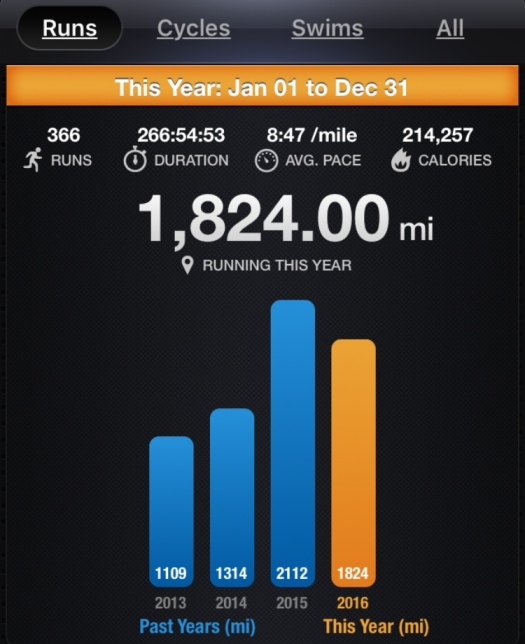 2016 was Year 2 of the running streak that I started in 2015.  I really wanted to see if I could run every day for a year, but once I got past that first year, I just kept it going.

I managed to log 1824 total miles in 2016.  This is 288 less miles from last year, which surprises me a little, seeing I did both an Ironman and the Chicago Marathon in 2016, and only the marathon in 2015.  Both 2015 and 2016 were years in which I ran every day.  I think the main reason for the smaller year end total was that in November 2015, I started to wonder if I could get over the 2000 mile mark, and once I did I kept it going hard until the end of the year, running a lot of 8 and 10 milers until I reached the 2112 mile mark.  (Being a die-hard Rush fan, how could I not shoot for that number?)  This year I developed a nagging foot issue in December and really cut back in hopes of making it to the end and keeping the streak alive.  Now that I have completed the 2 year streak, I think I better take some time off and let the foot heal.  Plus, running a mile the day after an Ironman and a marathon was a very hard task.  I have a huge year ahead of me planned for 2017.  You never know with me, though.

One of the stats in the photo above is the average pace of 8:47 / mile, which surprised me quite a bit.  It was 8:12 / mile in 2015, and I have always been more concerned with pace than distance.  But since I trained for both Ironman Lake Placid and the Chicago Marathon this year, I logged a lot of long, slow distance runs.  I’m not one to remember the weather, but I do seem to remember a lot of long, hot runs which may have also slowed me down.  I will review it again in 2017 and see if I’m still slowing down.  At 53 years old, I kind of expect it.  But after setting another marathon PR this year, I also question it.

As far as racing goes, I took it a little light this year, only doing five races, which is two less than in 2015.  I have included a link to my previous race report blogs.

Notes: 2016 was a leap year, adding an additional day to the year. The averages are based on 28 years of running data. 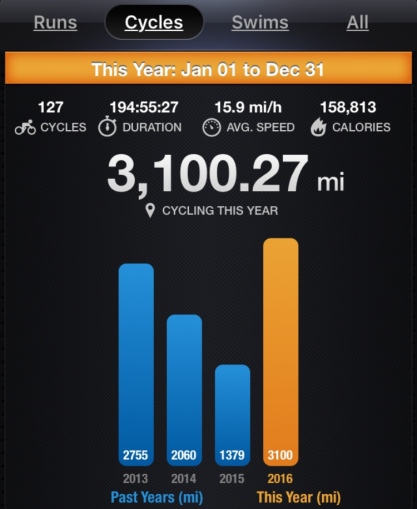 The bike and swim went well for me this year.  I more than doubled my bike mileage from last year, which was expected thanks to all the training I did for the Ironman.  Swimming was way down from my other Ironman year of 2013, somewhat due to pool issues and also due to me thinking all that damn swimming wasn’t that necessary for me.  I did 67K less yards this year and still took off about 12 minutes from my Ironman 2.4 mile swim time.

For 2017, I will swim about the same or maybe cut back just a little more.  I think the training plan is a little too swim heavy, and I am completely fine with being able to swim the 2.4 miles in 1:20 or so.  I will keep an eye on how I am progressing throughout the year and adjust it if necessary.

I’d like to get my bike average up to near 17 mph or more for Ironman Louisville in 2017.  I think that is doable.  IMWI and IMLP were very challenging bike courses, and I am hoping for a faster ride at Louisville.

I think 2016 went really well for me in my running endeavors.  I was glad I was able to complete my streak, running at least one mile every day for two straight years.  I also set two new personal bests in 2016 in both the Ironman and marathon.

I thoroughly enjoyed training with my Gunner teammates Dave, John, Jeff and Alex and completing Ironman Lake Placid with them.  It was an awesome day.  I also got to race with my son Ben in the one 5K we did together.  That was a hot race.

But I think the most notable thing for me this year was once again qualifying for the Boston Marathon with another personal best at the Chicago Marathon.  I lowered my time by another 3 minutes, and gave myself a BQ-4:51.  Not quite a slam dunk sub-5 minute cushion, but with the cutoff to get into the race sitting near 2 minutes under the qualifying time, I think I have a pretty good chance at getting into the 2018 Boston Marathon.

The “A” race for 2017 is Ironman Louisville on 10/15/17.  I look forward to 30 weeks of training with my buddies and sharing this experience.  I also have the Batavia Triathlon sprint on the schedule, and will probably add the Chicago Triathlon too.  It’s been suggested that we try the Triple Challenge again, and knowing my Gunner teammates, that’s probably what we will do.  The Chicago Marathon is a no go this year, as it falls the week before the Ironman.  Even I am not crazy enough to attempt that.  I’m regretting it a little as it is the 40th anniversary of the marathon, but I will make sure that I maintain my legacy status and make sure I can run the 50th.

Other than that, I hope to stay healthy, and out of harms way out on the roads training for my planned races.  See you in 2017!