This is the fourth time for me doing this race and it seems to have changed on me when I wasn’t paying attention.  The first time doing this race was back in 2011 when I did it with Ben, and I really enjoyed it.  8 miles is a unique race distance, so it was fun to tackle something that I was for sure going to PR in.  Race day in the past for this race has been sunny, frigid, windy and wet, thanks to a late October/early November race date.  This time around we had wet for sure.  The temperature was nice, in the low 50’s with not much wind, but it had rained the day before and early morning of the race and threatened to rain again.  Fortunately, the rain held off while we raced, although Kari said she felt some during her 5K.

Which brings me to the 5K.  They added one.  There never used to be one.  And that’s not all they added.  The added another whole day.  Confused?  So was I when I went to sign up.  I guess this little race that seemed to fly under the radar had become a little more popular.  You could choose to run the 8 mile race or the 5K on either Saturday or Sunday, or both if you are crazy enough.  Since we had some Saturday obligations, we opted for the Sunday race.  I’m glad I did.  Like I mentioned above, Saturday was rainy.  I heard a local runner on Facebook say that they hated the race, but I can only assume she hated it because of the weather.

So why did they add a whole extra day of racing?  1855 total participants for this formally quiet little race!  Saturday had 818 total runners and Sunday had 1037!  That is a lot for this forest preserve limestone path trail.  In comparison, in 2011 there were only 466 competitors in the 8 mile only race, 505 in 2012 and 640 in 2014.  In 2016, they had a total of 1059 5k/8mi runners.  Quite a difference.  Did they add the day to accommodate more athletes, or to make more money?  That’s a possibility because this race is put on by  a company that seems to hold races all over the area.  They do a good job for the most part, but you can tell by the way it is run that it’s just different.

Okay, enough with the details of the race.  Time for the report!  I told Kari that I was signing up for the race and told her that there was a 5K too.  She said to sign her up for it and that’s the story I’m sticking to.  I set my alarm for 5:45am and got up and ate so we could get there early and grab a parking spot in the spot limited lot near the race.  I’m glad we did get there early, because everyone else was stuck with the shuttle bus option.  Except for the guy with the huge tow truck.  He decided to make me very nervous by parking next to me.  The forest preserve police watch this lot like a hawk, and I thought this guy was there to tow people who violated the parking rules or something.  This truck was huge, but he was wearing running gear, so my fears weren’t needed.  Also parked near me was a guy in a black pickup truck with a Marine Corp sticker as well as a Brown University sticker.  He got out and I immediately keyed on him as a potential challenger, i.e. he was old like me, and looked pretty fit.  Kari said he was “ripped.”  Thanks, Kari.

I brought a few layers along but after a quick warm-up run of about 10 minutes with a long sleeve over my short sleeve shirt, I decided I’d be good without it.  I did put on a pair of cheap thin gloves to keep my hands warm and we walked to the start.  Others though, they were dressed like it was going to be 20 degrees, not 50.

In the past the start and finish were at the same place, located on the grass track next to the parking lot, but they moved it and I got a little confused.  I made my way to the front and waited for the start.  For the start you funnel through a very tight space and I didn’t want to get caught up with a bunch of others slow rolling through it.  I think when we started, I was probably in the same position as I ended the race in.

When the horn sounded we all took off and made our way quickly to the trail.  I felt like I had settled into a nice pace, but I was starting to get passed by some questionable people.  At the first mile mark I got passed by a girl who was not questionable at all and mentioned to her that she only had one other girl ahead of her.  She replied that she’d give it her best to catch her.  At the 1.5 mile mark, she did the 5K turn around and instantly became the top female, as the leading girl continued on to the 8 mile course.  I guess that’s one way to take the lead!

After getting past that 5K turn around, things got thin real quick.  Thanks to a meandering course through a wooded forest preserve, I quickly lost sight of the leaders and then the next person ahead of me as well.  It’s a good thing that the course was adequately marked and that I had run it before, because I was all alone except for the wheezing guy behind me, and I can only assume he was trusting me to lead the way.  Speaking of that guy, he was doing that breathing thing that runners do when they are well into Z4, and probably should dial it back a bit.  I give him credit, he did hang behind me about 200 feet back for most of the first six miles.  He was wearing a bright fluorescent green windbreaker and it was easy for me to keep my eye on him.

At the four mile mark I was just under 30 minutes and decided to start taking small portions of my gel.  I’m glad I did because it certainly provided some quick energy for me and made me feel better. Instead of downing the gel quickly, I nursed it from mile four through mile 6, providing me with just enough energy to get to the end feeling good.

I kept my eye on the green jacket guy, but was surprised to see a light blue dressed runner had passed him.  And if she had made up ground on the guy behind me, she might be making up ground on me.

But she wasn’t.  Nor was anyone else.  As a matter of fact, after that girl who passed me at the one mile mark and turned for home in the 5K, I passed no one and no one passed me.  Well, that’s not entirely true.  At the seven mile mark, I started catching runners walking the tail end of the 5K.  Looking at the 5K results, I passed about 23 of them.

I made my way off the trail and hit the horse track for the run to the finish.  I had done a warm up on the grass before the race, so I knew that there were some big puddles about halfway down the back stretch.  I made my way to the rail and paced my way in.  After a quick look back at the turn, I could see there was nobody immediately behind me that could catch me, so I coasted the last 100 yards into the finish.  Kari cheered me in, and I was glad to call it a race.

After a short walk cool down, we headed back to the car as it was starting to rain.  We changed clothes and grabbed an umbrella and headed back to the awards ceremony.  It seemed like the rain was starting to make everyone edgy, even the event hosts too.   I grabbed a cup of the “hot” cider I asked the guy with the microphone when the award ceremony would be, he told me just go tell the lady in the tent that you earned a medal.  I did, she gave me my age group medal, and we split.  Except for the runners still out there trying to finish the 8 miler, all of us were done with being there. 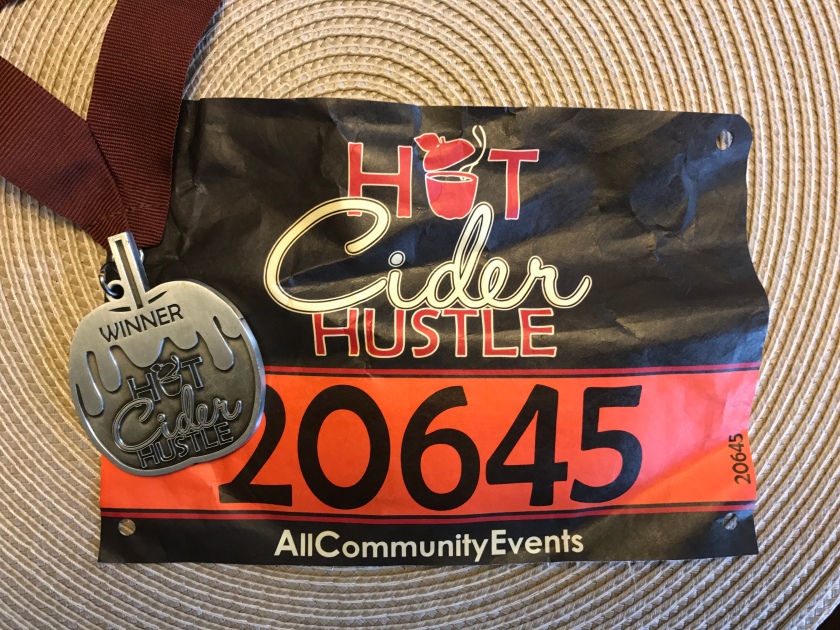 I was surprised to see that I had finished 5th overall.  Had the Saturday and Sunday runners ran together, my time would have been good for 13th place overall.  I still would have placed first in the M50-54 age group.  Looking at my previous finishes, I placed better even though my time was third fastest.

So it seems that I am destined to get third place in the age group next time (lol).  With only 300 in the 8 mile field on Sunday, I moved up in placement quite a bit, finishing in the top 1.6% of finishers.  I guess that makes it a pretty good day.