When it comes to training sometimes I get too competitive with it.  What starts out as a simple training workout, straight from the training plan, it often goes right out the door when I actually start the workout.  I’m like a dog out for a simple walk until I see a squirrel, then the chase is on and I’m no longer interested in the simple walk. 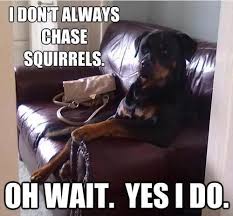 Case in point for me this week was my Friday easy run.  When I say easy I mean that it was a Zone 2 out of 4 heart rate based run, for 60 minutes.  Essentially, this is a run that is done at a conversational pace, meaning that you should be able to easily carry on a conversation while running, rather than a Zone 4 race pace.  That’s what the plan called for, but I had other plans.  It was a nice day, and I had realized that the marathon that I had already decided to forego was coming up next weekend.  I had planned on skipping the race due to a couple of injuries that prevented me from training sufficiently and the fact that I had decided to do Ironman Choo with my buddies instead.  But I was curious about how far off my conditioning was, or if I was even capable of holding my 8 minutes per mile marathon race pace.  So I headed out the door and started running comfortably hard, essentially Zone 3 on the heart rate scale to see if I was even anywhere near the ability to race a marathon.  This is essentially a bad idea and I probably should have known better. 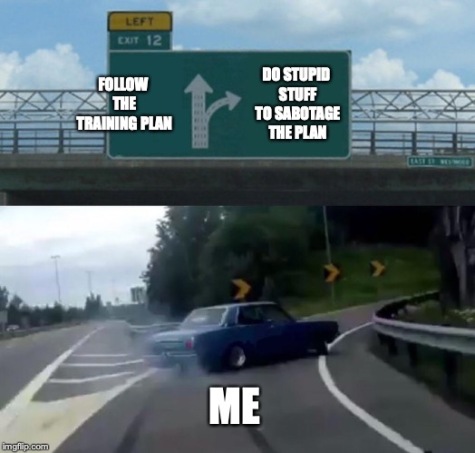 I was feeling pretty good.  My continually sore legs weren’t really bothering me, and I felt no soreness in the upper thigh area where I had just recovered from the second of two muscle strains.  About 1.75 miles into the run the squirrel appeared in the form of the local high school boys track team running hill repeats on the trail ahead of me.

Now, I’m not shy about challenging myself on this hill.  Someone made it a Strava segment, and I currently sit at a tie for 10th place on this segment.  My brain can typically shut down my urges, especially when I’m 1.75 miles into an 8-mile run, but this time there was a squirrel, several of them.

They were standing on the other side of the bridge at the bottom of the hill and as I hit the bridge they could hear me coming and turned to look with a surprised (who the hell is this guy?) look on their faces. I had already decided to race them up the hill, but that wasn’t enough.  I shouted, “DON’T LET AN OLD GUY BEAT YOU UP THIS HILL!”  And with that one kid yelled “NO WAY!” and the race was on. 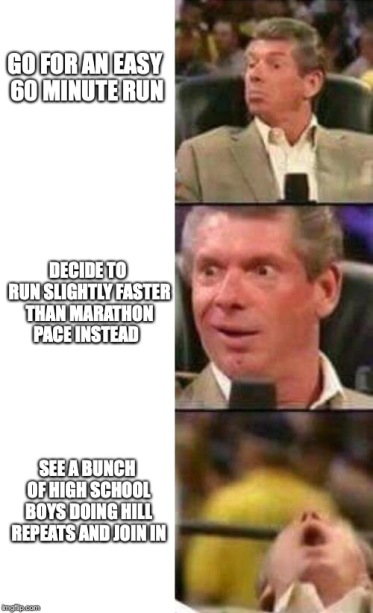 I guess that there were about a dozen of shirtless boys that I started with.  By comparison, I was wearing a long sleeve tech shirt and long sleeve windbreaker over that.  Plus I had the disadvantage of being 40 years older than them.  I overheard a kid tell the coach at the bottom of the hill that this was his 7th and last hill repeat, so I guess it was kind of an unfair fight, but that equates to about the same distance I had run to get there, and I hadn’t taken it easy either.

I started picking off kids, which I found easier than I thought it would be.  A few could hear me coming and kept looking behind to see how close I was getting, but they would get caught.  About halfway up the hill, my heart felt like it was about to leap out of my chest.  The kids I was slowly passing seemed like it wasn’t even bothering them that much, but their effort said otherwise.  As I got to the top of the hill there was another coach there waiting for the group.  “I just outran half your team up that hill, coach!”  I told him between heavy panting.  He smiled and laughed.  I continued on to the nearby intersection and was glad to see that I would have to wait for the light to cross the street so I could get a much-needed rest.  To my surprise, I was able to continue most of the remainder of the hour-long run around my marathon pace without much difficulty, but I knew that continuing on for a full 26.2 miles would have been a challenge.

Although this run could have easily sabotaged my week, it didn’t, but I never seem to learn from these dumb challenges.  My Saturday long bike ride resulted in me pushing myself again.  This was my first effort outside after spending my winter bike training on a spin bike indoors.  Those indoor rides would make me sweat, but never really tire me out.  I was essentially doing high spin rides and conditioning my butt to a saddle more than working my legs hard.   But I wanted to prove that they were equal to my outdoor rides, so I tried to ride the same speed outside that I was doing inside.  Big mistake.  It was a challenge for me to keep my average speed above 16 mph, whereas indoors it was my typical easy ride.  That just goes to show that riding indoors, whether it be a bike on a trainer or a spin bike, is not on the same level as being outside dealing with wind and a variety of rolling terrain.  It’s still better than not riding at all.

I finish these efforts and often reflect as to how close I was to the actual workout, and often times I am shooting myself in the foot.  Even with my constant achy legs and what seems like quickly diminishing ability to go fast at 55, I can’t seem to remember sometimes that the goal is to pace myself throughout the 30 weeks of training so I can adequately pace myself through 140.6 miles, or at Chattanooga 144.6 miles.  I gotta stop being my own worst enemy.

2 thoughts on “I’m My Own Worst Enemy”