2019 Minocqua Turkey Trot 5K – The race that will be forever known as the “YOU ASSHOLE!” race.

Link to the Overall Results

The family was up north in Minocqua for Thanksgiving and four of us decided that doing the local turkey trot would be fun.  Ben had already looked at the previous results from last year and figured he could easily beat the winner’s time by a couple of minutes.  I was glad to see we could save a few bucks by signing up as a family, $90 for the four of us instead of $30 each on race day!  What we hadn’t planned on was the snowstorm the day before.

The snowstorm caused the race director to alter the course and eliminate the trail portion of the run.  The course was now changed to an out and back.  The town took care of the snow for the most part, but the sidewalk and the streets we would run on still had some snow.  Fortunately, due to the sand they throw around up there on the streets, the footing was pretty good.

So we all showed up, registered and then Kari and I went back to the car to keep warm while the real runners, Ben and Emily, went for a pre-race warm-up.

The start time approached and we all started gathering around the start banner.  Ben had keyed on a kid wearing a Ripon College cross country shirt and figured he would stay with him until the end and out-kick him.  Emily joined me and said she was going to run easy, which meant to go my pace, and I was glad to have the company.  Kari took her spot away from the front and then the countdown began.  8…  7…  6…  I hate when they do this because some guy always will jump the gun and go on 1, but here we were.  1…  GO!

The race start was narrow and fed us almost immediately into a more narrow sidewalk, and that is when the festive mood of the race changed for me.  A woman runner started to run almost directly at me from the left and I thought she was going to run into me so I held my arm up and kept her from bowling me over.

“YOU SHOVED ME, YOU ASSHOLE!”

For the record, I didn’t shove her.  She didn’t even lose her balance.  She just didn’t get to run into me like she was about to do.  I explained to her that I was just keeping her from knocking me down, but damn, she was angry enough about it to call me an asshole.  But now I was a little miffed.  When you are a slow runner you shouldn’t be starting at the front of the race where the faster runners belong, and if you are going to cut someone off you better understand that the person you are cutting off isn’t going to like it.  Why can’t these races just be fun and not end up with some weird, screwed-up occurrence?  Happy Thanksgiving to you too, lady.

So with that incident on my mind, I tried to find a comfortable pace to run and try not to slip and fall on the snow-covered sidewalk.  Emily and I made our way to the side street and to the turnaround point without any further issues.  There were a couple of younger guys ahead of me wearing turkey outfits and I decided that I didn’t want to get beat by a couple of turkeys, so I started working on pulling them in.   Emily had also decided to push ahead and leave me in her snowy dust.  The first turkey I caught pretty quickly but it wasn’t until about a half-mile left of the race that I caught the second one.  Another runner was ahead of me and I passed him as I was starting my last all-out kick, but he still had a kick left and then blew past me and started racing a high school kid up ahead that we were getting close to.  I finished alone without any further challenges.

I looked at my watch and saw that the GPS recorded a distance of 2.90 miles and Ben and Emily said the same.  The course was a little short, but no big deal.

Being called an “asshole” aside, it was a pretty good race for all four of us.  Ben implemented his race plan and waited until 20 feet left to take the air out of the other kid and beat him by a second, winning the race.  I think Ben enjoyed toying with his prey until the final moments.  He won’t deny it.  Emily was also first on the women’s side and both of them got turkeys for their wins.  Kari was also on the podium with a 3rd place in her age group.

When we got home I was explaining to everyone what I did to get called an “asshole” and I demonstrated what she did with my daughter Rebecca.  As I got close to Rebecca she instinctively put her arm up to keep me from running into her.  There, I am vindicated! 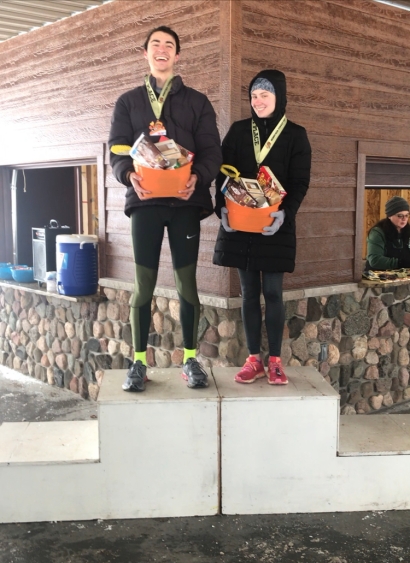 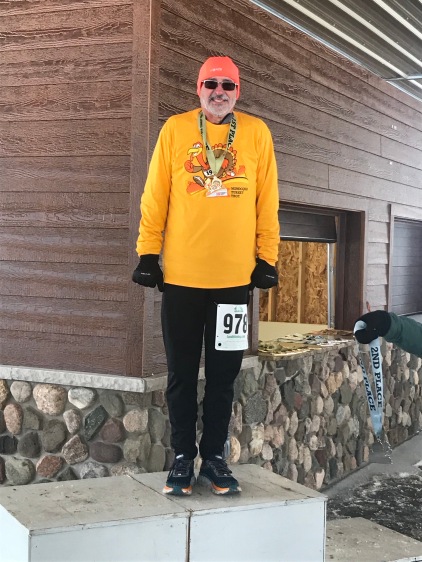 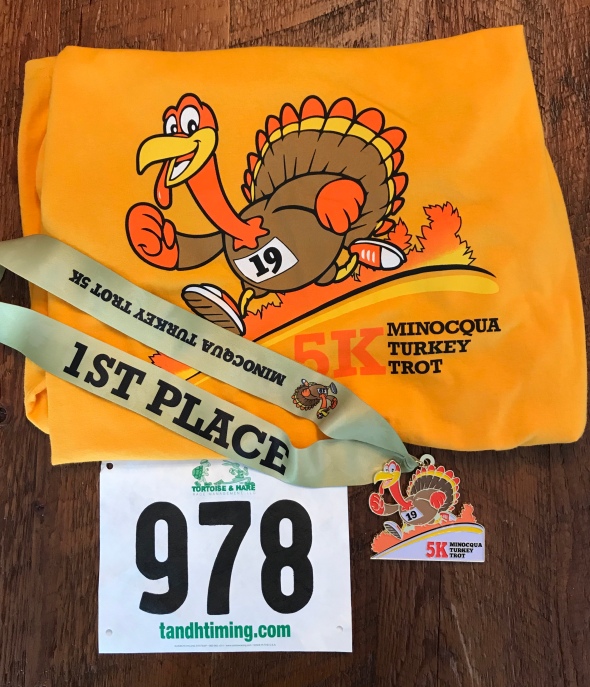