When I show up for a 5K I tend to start scanning the people gathered around, looking for the usual suspects, the people I will key on as my competition.  Since school was officially over for the high schools, I figured I would see a handful of high school age runners, fresh off of their track seasons, and there were a few.  I also saw this kid who looked about 9 (the results indicate he was 11), and he had the “look.”  Short running shorts, a set of wrap around sunglasses, and New Balance shoes that looked like racing flats.  It was about 40 minutes until start and he went out for his warm up.  I knew a runner when I saw one.  I also saw a guy wearing a Calvin College Track Team singlet who looked fast as well (he was the eventual winner).  It wasn’t until I saw Nate Troester, a local guy who wins every race, that I knew for sure that I certainly wasn’t going to win this race!

My wife Kari joined me in this race as it is walking distance from our house.  We walked down to the park about 3/4 of a mile away and signed up.  It was starting to get warm, and the race start time of 8:30 am was not helping.  Much too late to start a summertime race, in my opinion.  I tried talking Kari into gunning from the start, but she’s happy to run the race her way.  I was already starting to build adrenaline for the start time.

I did some easy warm up and then headed to the start line.  I’m always amazed at the number of slow people and kids at the front of the line.  One guy said he’s staying back to let the rabbits go, but this guy was in the front as well.  I dislike the tight corral type starts.  They are too crowded, and filled with too many slowpokes at the front of the pack.

A couple of minutes later a horn sounded and we were off.  I was surprised that many of the kids were holding tempo pretty good at the beginning, but by the time we got a half mile into it the first small climb appeared, and they started to drop off.  It was also in that first half mile that I was surprised to see Nate Troester standing there clapping for everyone.  I guess he was just hanging around.  I was happy to see that I had just picked up a finisher’s spot!

At the first mile, a local kid named Merrigan was running along with me and not far off the first place female.  We went through the first mile in 6:25 pace and I thought she would be good.  But later I found out she had a sore knee from an earlier mishap and ended up dropping out.  I kept pace behind the first girl for the next mile, as I also chased the one grey haired guy up ahead of me.  He was moving pretty well and not showing any signs of letting up.

After the turn around, we climbed the few remaining hills and settled in for the last mile.  I caught the first place girl and passed her.  I could see the grey haired guy up ahead, but he was pulling away, as was the kid with the sunglasses.  That kid knew what he was doing, running the tangents and basically picking off more and more runners.

I tried using the last downhill to pick up pace, using it to pass an 8th grade kid, and then accelerate through the last turn for the last 10th of a mile.  I couldn’t catch anyone ahead of me, and there was no one directly behind me to worry about, so I glided in across the finish in 20:57.

I grabbed a water and dumped it over my head to cool down.  I then walked back to the turn and waited with my daughter Rebecca for Kari to finish.  She came by looking very strong, but I tried to tell her that she was getting out-kicked by a 5 year old!  She didn’t care.  To get beat by a 5 year old would have killed me.

When the results were posted I was surprised to see that I finished 10th, and first in my age group.  I would have bet that the grey haired guy ahead of me was in my age group.  It turns out he was 58!  Smoking fast for 58!  I also checked the results for Kari and learned that she medaled as well, taking 3rd in her a/g!  Well done!

In all, it’s a fun local race, and I thoroughly enjoyed the run with my wife. 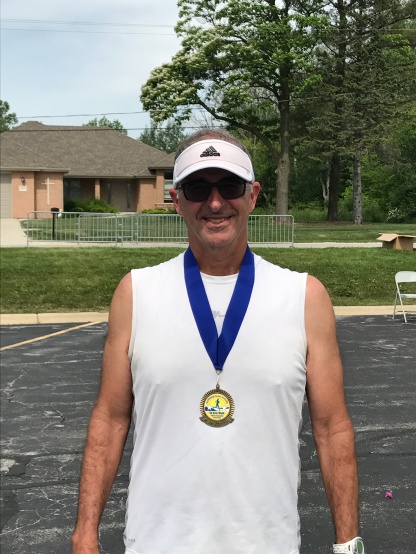