Where:  The Forge – Lemont, Illinois

First time racing a triathlon since Ironman Chattanooga in 2019! It seemed a little different, but all things considered it was just like I remembered it.

I was a little apprehensive about this race. Any first-ever race, especially one that is not governed by USA Triathlon, can raise a red flag for me. But as more information kept coming I realized that the race director wasn’t a first-timer, and in the end it was a really well run event.

The Forge is a small to medium sized adventure style park located next to the old Illinois and Michigan Canal and the Lemont Quarries, where stone was mined to help build and then rebuild Chicago after the Great Fire. Lots of old quarries located in the Lemont, Lockport and Joliet areas. The park has zip lines, climbing walls, pump tracks and paths for cycling, and utilizes one of the quarries for swimming and kayaking. Lemont is a nearby community and when a link to this race was shared on a page I follow, I decided to give it a go. Okay, on to the race!

Getting up at 4 am is never easy, but I got up, ate, and then I drove to Lemont and parked at the Lemont High School parking lot, as the participant guide indicated that parking was limited at the Forge and it was really easy to park at the school and ride my bike to the park. Once that I got there, I found the rack for my bike and got my transition all set up.

After setting up I had some time to kill, so I walked to the swim start and exit, and walked back to transition to see where bike and run in/out were located.  I jogged down the bike trail a little while to burn off some anxious energy and then used the bathroom and headed back to get my swim stuff.

I had swam on Friday and had a really good workout.  Felt really strong and had no issues.  I’m not sure why I couldn’t duplicate that here but I couldn’t.  I was slow, felt like I couldn’t get enough air, and seemingly couldn’t get it under control.  I was getting passed by a lot of other swimmers, but I finally settled in.  Fortunately, the swim wasn’t long and I was out of the water soon enough.

I had planned for a non-wetsuit swim as the race director had said several times that the water temps had been high and that we should plan to swim without a wetsuit.  Turns out, Friday night and Saturday morning were cool and it was wetsuit legal.  I hadn’t even brought the thing.  I kind of wish I had, but nothing I could do about it.  There were only a handful of triathletes wearing them.  I would have thought that the quarry would have been really deep, but there were several places where I could easily see bottom, and there were times where my hand was actually touching the weedy stuff growing in the water.  I was in 76th place overall after that miserable swim.

T1 – 2:08 – Coming out of the water we had a thin, green outdoor carpet covering rocks, but I’m such a tenderfoot that it was a struggle for me.  Then we hit the crushed limestone and I didn’t really enjoy that either, but eventually we got into transition where there was more carpet covering grass.  I quickly grabbed my water bottle and rinsed off my feet and then made a decision that I later regretted – I decided to go sockless on the bike.  I never do that but I didn’t want to wrestle socks onto two wet feet.  22nd overall fastest through T1.

The Bike – 37:52 – I had biked on Thursday and I thought that I could probably push close to 20 mph average on race day.  Boy was that wrong.  I ended up averaging about 17 mph, but it wasn’t for lack of trying to go faster.  The course was new to me, and there were lots of slower riders ahead of me.  But the thing that really affected my overall speed was the numerous sharp turns, as well as a few hairpin turns thrown in for fun.  It was a difficult course, and even though there was a no passing mandate on a portion in which there was two-way riding on a six foot wide path, there was plenty of passing going on.  But from the moment when my butt hit the seat, I was gunning hard and passing lots of the faster swimmers.  I never got passed on the bike, and ended up with the 24th best bike split.

T2 – 1:25 – What I thought was a super fast transition from bike to run, it turns out I was pretty slow compared to the others.  This is also where I realized how dumb it is to go sockless.  My cycling shoe had worn the skin off a small spot on the top of my foot.  Needless to say, I put on my socks for the run and won’t be going sockless ever again.  The results had my T2 split at a questionable 164th place.  Really?  That surprises me because I thought I had done pretty well.  But I guess having to put on socks is what killed my time.

The Run – 22:04 – Grabbing my visor and bib belt, I bolted out of T2 without yet putting them on, and I was on the trail for what is my strong suit – the run.  I passed three very fit triathletes by 1/4 mile into it and was feeling great.  I just kept motoring along, passing numerous other runners.  I came up on one woman at the turn around who knew what was about to happen and stepped aside to let me go by.  I thanked her and started trying to catch the next runner.  Soon I saw another woman heading toward the turn around and I thought to myself that I bet she overtakes me soon.

Somewhere after the 2 mile marker, the course veered off the I&M Canal trail and headed onto a park trail.  There was a hill and the volunteer standing there said “You’re welcome.”  I said “I’m walking this damn thing.”  And I walked up it.  It was steep, but what goes up quickly came down as we meandered through the portion of the Forge where they have climbing apparatus and zip lining stuff.  There were some pretty steep rocky stairs that I had to run down, but they weren’t too technical.  Back up a couple more hills and it was back the the trail and over to where we had to pass the finish line and do a quick 1/4 mile out and back to the finish.  The out portion was where the woman who I figured would pass me finally did.  We went around the cone together, but she hit the gas and I couldn’t match her pace.  I had the 16th fastest run split for the day and moved myself up to 22nd overall.

I cooled down, grabbed a banana and some water, put on a dry shirt, and kicked back by the quarry to wait for the rest of the triathletes to finish.  The scrolling results on the projected screen would only show overall place and not age group place, so I had to wait until the awards to find out if I had placed.  When the announcer announced my time first I started heading for the stage.  I was slightly surprised at 3rd place in my age group, but I was glad to take home the award, even if it was an odd carabiner clip thing attached to a chunk of wood.  I think I prefer medals.  The Old Guy age group seems to be the most competitive group out there.  16 of the top 25 were over 40 years old, and most of the rest were in their thirties.  Only two of the top 25 were under 30 years old, a 19 year old and a 29 year old. 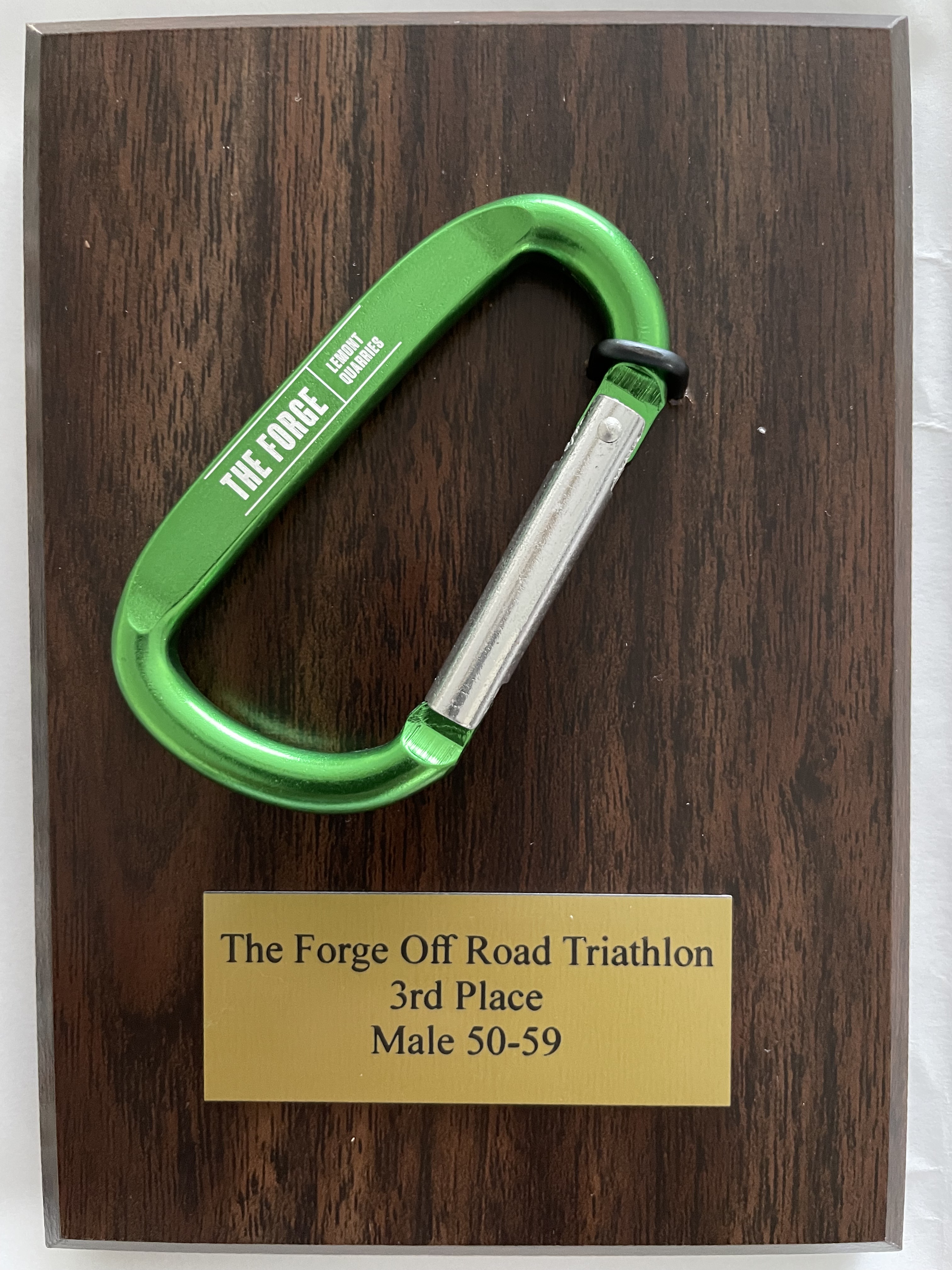 Conclusion – The Forge Off-Road Triathlon was a fun event.  It was different to have to actually think about riding on a course like this, instead of just hammering along in aero on my tri bike.  I would do this one again, and would recommend it to anyone thinking about hitting the trails for the bike and run instead of what we normally race on.